The DC: Trump considers invoking Insurrection Act to quell riots, and... ⛪️ How do you feel about Trump's visit to St. John's?

Join the 100,018 people who've taken action on Countable this week

Is it an insurrection?

President Donald Trump has warned that he will deploy the military to quell rioting in cities across the country if the “righteous cries of peaceful protesters” continue to be “drowned out by an angry mob."

"If a city or state refuses to take the actions that are necessary to defend the life and property of their residents, then I will deploy the United States military and quickly solve the problem for them."

The Constitution vests states with the primary responsibility for ensuring civil order. But it also empowers the federal government to protect states and use the military to “suppress insurrections and repel invasion” (Article I, Section 8, Clause 15) and to stop “domestic violence” if requested by a state legislature or governor (Article IV, Section 4).

To clarify these powers, Congress enacted the Insurrection Act of 1807, which allows the president to use the military to suppress an insurrection at the request of a state, to enforce federal law, or to protect civil rights.

Read about previous times the Insurrection Act has been invoked, then join the conversation:

Should Trump call in the military to assist local law enforcement with riots?

For a politics-free guide to how to protect you and your loved ones from corona, click on over to our Coronavirus Info Center.

Park rangers and military police used tear gas and physical force to clear out peaceful protesters near the White House so President Trump could "pay respects" to the historic St. John's Episcopal Church.

The president "used a Bible and a church of my diocese as a backdrop for a message antithetical to the teachings of Jesus and everything that our church stands for," argued Mariann Budde, the Episcopal Bishop of Washington, D.C.

"The president did not come to pray; he did not lament the death of George Floyd or acknowledge the collective agony of people of color in our nation. He did not attempt to heal or bring calm to our troubled land."

"We expect leadership from our president and particularly in times like this," Grassley said Tuesday. He added that while the protests weren't violent at the time, they could have turned:

"It's all assumed to be peaceful until someone that's got a terrorist activity or a rioting activity, you don't know that until it happens. So I don't know if they could have known that."

How do you feel about Trump's visit to St. John's?

Amid the COVID-19 pandemic, the unemployment rate was in double digits in all but six states in April, according to Bureau of Labor Statistics (BLS) data.

That marked a dramatic economic decline due to pandemic-induced lockdowns, as the national unemployment rate went from being at or near a 50-year low at the end of 2019 to 14.7% in April, the highest since the Great Depression.

This chart from USAFacts shows the unemployment rate in each state at the end of April: 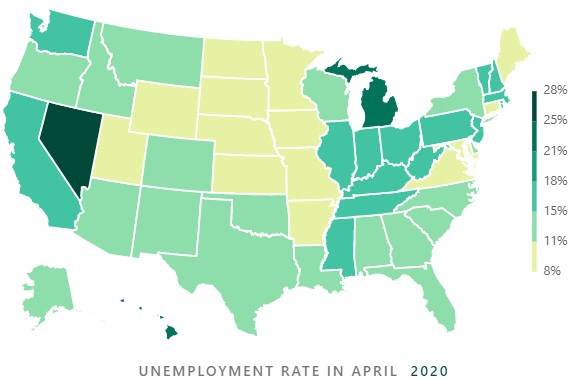 Take a look at more charts and graphs here, then tell your reps:

Do you think that unemployment will decline as states gradually reopen?

Not everything breaks down in #BlackLivesMatters vs. #BlueLivesMatter.

It's Love Conquers All Day. Let's do all we can to test that theory,

Talk to us via email at contact [at] countable.us. And don’t forget to keep in touch @Countable.