Install the App
TRY NOW
Countable is getting a new name!
ProPublica

How Effective Is Your Representative?

Join the 60,093 people who've taken action on Countable this week

Hello, and welcome back to another edition of A User’s Guide to Democracy! If you’re new here, you can check out our previous pieces on what you need to know about political advertising and our round up of the deadlines, rules, and links you need to vote in this year’s midterms.

Today, let’s talk about who you’re actually voting for in the midterm election: members of Congress. Made up of the House of Representatives and the Senate, Congress is tasked with making laws on our behalf. Since senators keep their jobs for six years at a time, a lot of places don’t have a Senate race this year. But no matter where you live, your congressional district is voting for a House representative in this election. So today I’m going to focus on how you can keep tabs on your representative.

Most of us learned what Congress does back in elementary school social studies (maybe supplemented with some Saturday morning “Schoolhouse Rock”). It probably went something like this:

It turns out, that’s not exactly true. As my colleague Derek Willis has helped me understand, that’s not how it works most of the time.

Congress does pass a lot of bills through the legislative process. But these are mostly non-controversial: bills to congratulate someone, rename a post office or designate a national week. There’s no debate and no deliberative, committee-driven process required.

When it comes to the legislation you do hear about — big, politically contentious things like immigration, health care and taxes — the process hasn’t been working as planned.

Why Does Congress Seem So Stuck?

One reason for the gridlock is that, these days, bills on big, national issues are written under the supervision of the Senate majority leader and the House speaker (currently Sen. Mitch McConnell and Rep. Paul Ryan). They receive guidance from only a small group of other congressional power brokers, rather than the rank-and-file lawmakers who used to contribute to the process. 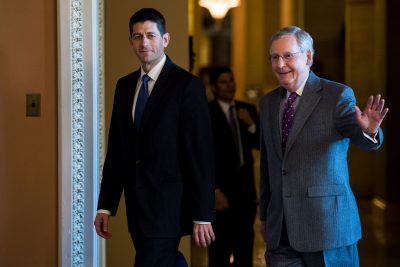 The resulting legislation, crafted behind closed doors, is presented as a “take it or leave it” deal when it’s voted on by everyone else. Faced with legislation on which they’ve had no real input, many members opt for “leave it” — and the bills get stuck in legislative limbo, without enough support to pass a nearly evenly divided Congress.

To evaluate your lawmakers in this new reality, you can look at what they are doing and which issues they’re spending their time on, either through lawmaking (on those topics that don’t necessarily grab headlines) or in public position statements.

One of the ways you can find out what your rep is up to is by checking out the bills he or she has sponsored. This is all public information, and ProPublica’s Represent app can help you navigate to the information that matters to you.

Is Your Rep Getting Things Done?

To understand your representative through their bills, you want to look for three things:

What the bill is about: Think about the things that matter to you and your community, and ask yourself:

How far it got: Every bill that gets introduced is automatically referred to a committee. Many measures never get past this stage and were never intended to — because they are mostly meant to let lawmakers go to town halls and say, “I introduced an important bill.” But virtue signaling is not enough for those of us who want to see things get done. To see where they’re really focusing their energies, take a look at recent bills that made it beyond the introduction stage.

Who else is supporting the bill: When it comes to bill co-sponsors, pay attention to whether or not it has bipartisan support. Whether you want a lawmaker who’s willing to compromise with the other side, or whether you object to compromise as a sign of giving in to the other side, bipartisan support can mean that your representative has done some work to shop his or her bill around and help get it passed.

Head over to Represent and take a look at the bills your representative has introduced during this term.

Legislation isn’t the only way to compare your representatives’ concerns against your own. There’s also the stuff they talk about. We’ve analyzed every press release from each member of Congress, to identify which policy areas they primarily focus on. These stated priorities are a useful introduction to what they care about, even if they’re fairly broad policy topics. You can find those on Represent under “Policy Priorities.”

But don’t stop there.

We’ve also analyzed those press releases to identify “Distinctive Topics,” which are those subjects that someone talks about in his or her press releases more often than other members of Congress. As the person in the federal government closest to you, working in your district’s name, these more specific issues should, ideally, sound familiar. Do they?

If they don’t, jump back up to the top of this list of questions and get to understanding. The point here is: The more information you have, the more it empowers you to ask better questions.

Now that you’re familiar with the basics of using ProPublica’s Represent database, this week’s assignment is to look up the legislative work of your lawmakers in the Senate, too. What does it tell you about what they’re doing in your name?

And you’re done! Next week, I’ll walk you through tools to help you evaluate the candidates in your district, head to head. Talk soon!